Connect systems in a simple way

The Frank!Framework is the basis for the integration of systems and applications in your company. It is an open source framework based upon Java, that has been developed by WeAreFrank! to make it relatively easy to create (low code) custom-made Java connections for (complex) operating systems.

The name says it all: Frank!Framework is an open and transparent platform, that can be used by anyone. Moreover it features a management module (the Frank!Console), that offers the user an extensive overview of the status of the connections and data, at all times.

With Frank!Framework customized connections are achieved for complex systems and applications

A standard Frank!Framework is composed of three parts:

These three components each have their own function. 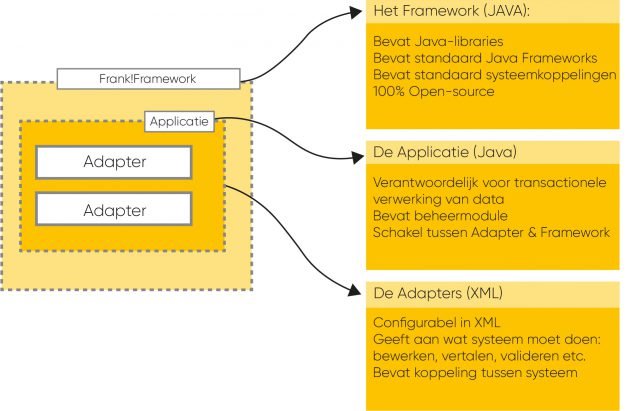 The Frank!Framework is the core. It consists of a selection of best-of-breed Java libraries, standard Java-frameworks and a number of default connections to commonly-used systems. To achieve a custom-made connection between two systems, we don’t need any adjustments.

The application provides the connection between the adapters and the basic framework. The adapter can communicate with the Frank!Framework through the application. Both the basic framework and the application are based on Java. These integration components are previously-built, extensive integrations between often-used company- and Cloud applications. They have been built on our Frank!Framework.They are fully managed and tested and can be installed and configured quite quickly without extra IT resources.

In addition, the application contains the Frank!Console, the management module to monitor whether all processes are going well. The application is also responsible for possible processing of data.

The adapters are the dynamic part within the Frank!Framework. They are needed to make the connection between the various systems. That is why the application always contains one or more adapters.

An adapter is an XML-configuration which indicates specifically what the system should do. For example, importing an incoming document through FTP into an Oracle-database. On the one hand, adapters realize connections between systems and applications that are not yet able to communicate well. On the other hand, adapters contain the business logic to process data, thus enabling them to convert and transfer documents and data from one system to another.

Frank!Framework can connect two systems directly. It is also possible, as shown in the image below, to connect the framework to an Enterprise Service Bus (ESB)

Send us an email Call us Chat on Whatsapp